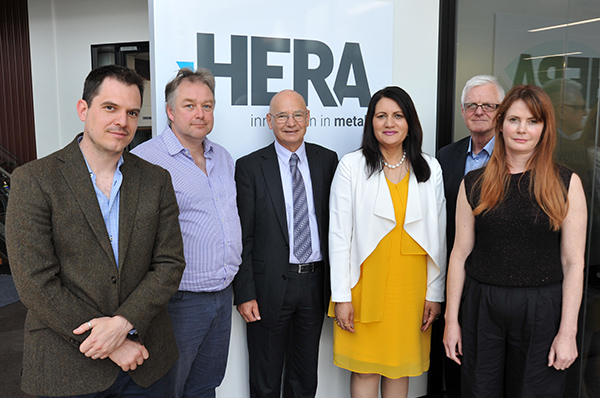 The members took the opportunity to brief Dr Parmar - National’s Spokesperson for Research, Science and Innovation - on the role of Independent Research Organisations (IROs) in New Zealand’s science sector.

HERA Chief Executive Dr Troy Coyle hosted the meeting. She explained that HERA was funded by a levy and had 600 company members. Their work is focused on transforming the industry, promoting innovation, environmental goals, and improving the metals industries’ social license.

Dr Alex Semprini from the Medical Research Institute of New Zealand discussed with Dr Parmar how IRO strategic funding had allowed MRINZ to build up some core research platforms and focus on clinical trial research, potentially leading to improvements in clinical management.

Dr Parmar, a National List MP based in Mt Roskill, was also interested in research from TERNZ/Mackie Research. Dr John de Pont spoke about the Te Ara Mua Future Streets project working with Auckland communities, Auckland Transport, and the NZTA to understand the impact of street design to make walking and cycling safer and easier.

IRANZ Chair Dr John Bright from Aqualinc explained how NGO-funded research had redesigned the water management system to enable better use of water allocations in a more sustainable, efficient, and equitable way.

Dr Parmar said the Research Sector needs continued certainty, including for investors. She was keen to provide this and keep science apolitical.

On 4 December, at this year’s last Speaker’s Science Forum “Food for Thought”, Dr Serean Adams (Aquaculture Group Manager, Cawthron Institute) spoke to MPs in the Beehive about aquaculture’s role in a sustainable solution to feeding the world, and what New Zealand research is doing to create new opportunities to differentiate and add value to New Zealand products.

CRL Energy have just completed a rebranding to become the Verum Group. They have adopted ‘Verum’, Latin for truth, as it is the foundation of their analysis, monitoring, consulting, and research business activities. And ‘Group’ to indicate that their specialist scientists, engineers, technicians, and analysts link together to provide integrated solutions for complex high level projects, as well as the specialist niches that their team is known for.

Verum Group has 30+ staff based at hubs across New Zealand (Christchurch, West Coast, Hamilton, and Lower Hutt), which bring together the skills of engineers, chemists, geologists, environmental scientists, and technicians to provide a wide range of services.

On 24 October the Bragato Research Institute extension team, along with NZ Wine sustainability and biosecurity team, were in Central Otago running an information exchange on mealybug and leafroll. Effective management of mealybug in vineyards is an ongoing issue. High numbers of mealybug can lead to issues with fruit quality (sooty mould) and the spread of Grapevine Leafroll associated Virus Type 3 (GLRaV-3). In recent years, mealybug have become an increased concern in Marlborough, and most recently in Central Otago.

In late-November, Len Ibbotson, BRI Viticulture Extension & Research Manager, and Vaughn Bell, from Plant and Food Research, initiated a one-year investigation into the relative abundance and species of mealybug parasitoids in Gisborne vineyards.

A hail-storm in early October affected winegrowers in Hawkes Bay. The event highlighted the lack of management information and decision-support tools relating to recovery from hail and frost damage. In response, BRI and the NZ Wine Sustainability team met with winegrowers affected by the storm to discuss management options and opportunities for learning. As a result, several trial sites have been established throughout the region to monitor recovery and the treatments applied.

Greg has a business development and communications background and will be driving the growth of a purpose built Innovation Centre. With a PhD from the University of Auckland, Hafez is a Structural Engineer with almost 6 years’ research experience in assessment and evaluation of structural components, structural systems and welds.

Malaghan’s Translational Immunology Team Leader Dr Olivier Gasser has been appointed as a Fellow of Food Standards Australia and New Zealand (FSANZ), a government agency that develops and administers the Australia New Zealand Food Standards Code. Made up of experts from a wide range of scientific and professional fields, the Fellows advise on food safety and standards in Australia and New Zealand. With the addition of immunology expertise through Olivier, the appointment recognises the growing need to better understand how ‘functional foods’ impact the immune system and human health.

MRINZ delegates were in Vancouver, Canada, in September for the annual REDCap Conference, sharing ideas about data management with delegates from around the world. REDCap, or Research Electronic Data Capture, is a software platform which MRINZ uses to manage its studies of all sizes. Most notably, the team have been using REDCap to manage the New Zealand Health Research Council Funded PIPPA Tamariki Study - a study involving thousands of newborn children and their families across the first six years of their life. Nick Shortt and Luisa Diputado shared their work on this particular study to the conference. Clinical Data Manager, John Martindale, also shared his work on security of patient and participant data entitled “Evolution of a risk-based strategy for REDCap system validation”. John’s work is around the most effective and efficient ways of keeping the systems up-to-date, re-evaluating the security and safety of updates, and enabling progress to happen without compromising the integrity of the systems.

Motu’s Sir Frank Holmes Scholarship is generously sponsored by The Hugo Group and is awarded annually to New Zealand's top third year university student in econometrics. This is the seventh year of the scholarship, with Josh McSkimming of the University of Canterbury winning this year's prize. Josh is completing a double major in Financial Engineering and Economics and has a remarkable academic record. He will use the prize money to help fund his study next year, when he will undertake a Master of Commerce in Economics.

The Executive Director of Motu Economic and Public Policy Research, John McDermott, has won the NZIER Economics Award. This is Aotearoa’s most prestigious award for economists in New Zealand. John has been the foremost macro-economist in policy circles for at least the past decade. The award was announced on Tuesday 3 September at the NZIER Awards Dinner in Wellington by Professor Les Oxley and Dr Dianne McCarthy.