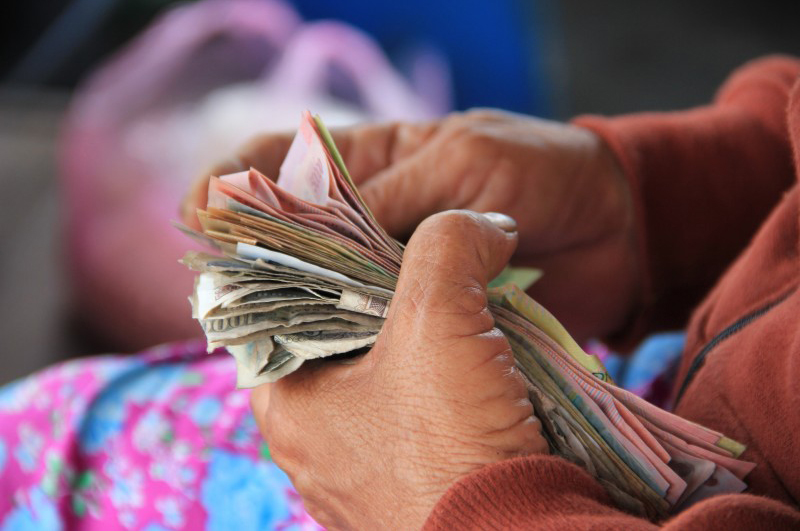 January 2023: The prospect of recession is looming ever large as central banks act to restore price stability. To understand the nature of recessions, you need a long historical record.

Unfortunately, official Aotearoa New Zealand data on quarterly real Gross Domestic Product (GDP) only goes back to 1987, limiting our ability to understand the nature of growth or frequency of recessions.

To help, Motu Research's John McDermott and Viv Hall (Professor at Victoria University of Wellington) recently updated their estimates of quarterly GDP back to 1947. This gives 75 years’ worth of economic history we can use to deepen our understanding of the Aotearoa economy.

The data is available for free on Motu's website. Download the excel file - or if you wish to access the data directly in Python, R or EViews - use the code provided on our website. 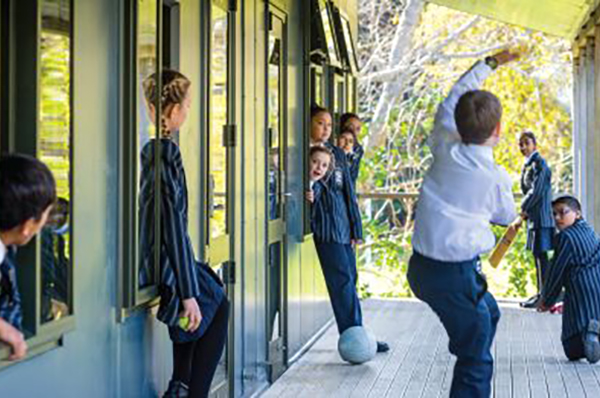 January 2023: About 10 minutes is all it takes for the air in a room to be exchanged with fresh air if you open windows on different walls. This helps remove or reduce particles that may be carrying viruses. This advice from the Indoor Air Quality Research Centre, which BRANZ helped establish, led to teachers ventilating classrooms as part of the COVID-19 response.

There are invisible dangers harbouring in the air inside some buildings that mean people might not be as safe indoors as they believe. Assembling the best minds in the country on ‘all things indoor air quality’ is helping to propel research in the field. This is in a bid to better understand the health effects and to find solutions to improving poor indoor air quality. 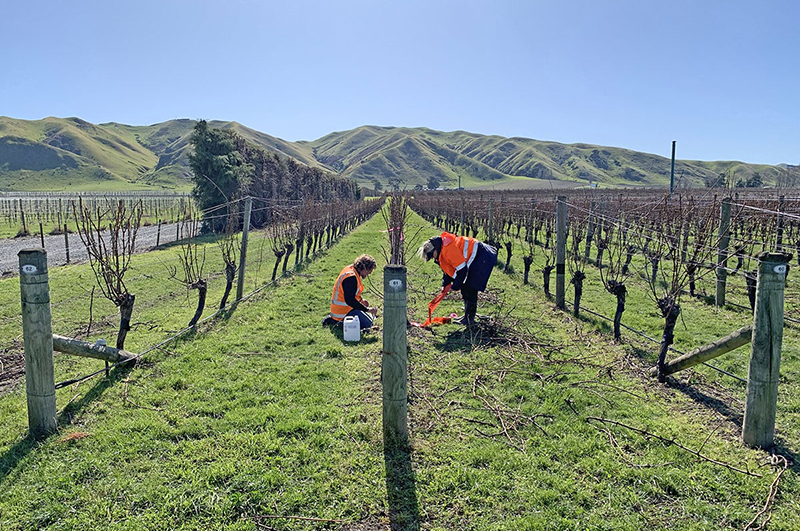 Bragato: Ground wētā in the Awatere

January 2023: The endemic ground wētā, Hemiandrus bilobatus, lives in burrows in the soil, but its presence can negatively affect wine grape production. This is especially so in vineyards in the Awatere region in Marlborough. Vine growth in early spring provides the ground wētā with a buffet of fresh buds to feed upon, which causes damage detrimental to vine growth and fruit yield.

The current ground wētā management tool sees plastic sleeves wrapped around vine trunks in an attempt to prevent wētā from accessing the cordon. However, the sleeves are costly to install and maintain, resulting in a significant waste-management issue.

The research team are hoping to develop an environmentally and economically sustainable solution to the growing problem of ground wētā. Among the issues they write about are identifying wētā burrows during the day. It is not straightforward because the wētā make soil plugs or doors to close their burrow entrances, so they are hidden from view. 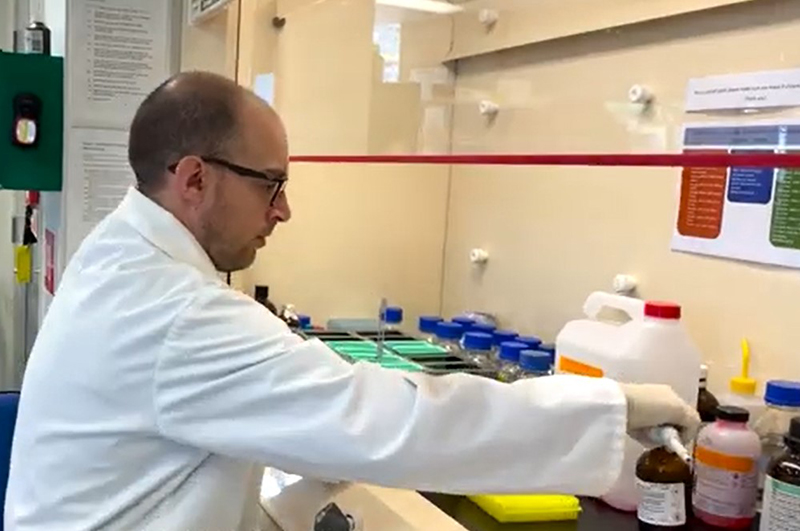 January 2023: CRISPR-Cas9 is an exciting new addition to the Malaghan Institute’s repertoire of tools to investigate the immune system.

“There will always be new technologies that allow you to expand your research or even unlock knowledge that we had no way of accessing previously. CRISPR-Cas9 is one of those technologies,” says Dr Olivier Lamiable.

Olivier, a member of the Ronchese Lab at the Malaghan Institute, is a team leader using revolutionary CRISPR-Cas9 technology to understand how allergic diseases develop on a cellular and molecular level.

“It allows us to precisely modify, add or remove specific parts of the DNA of live cells in a way that is faster and easier than any method before.”

Dr Olivier Lamiable is working to understand which genes are involved in the function of a molecule that might be involved in conditioning T‑cells to react and drive allergic responses. Photo: Malaghan Video. 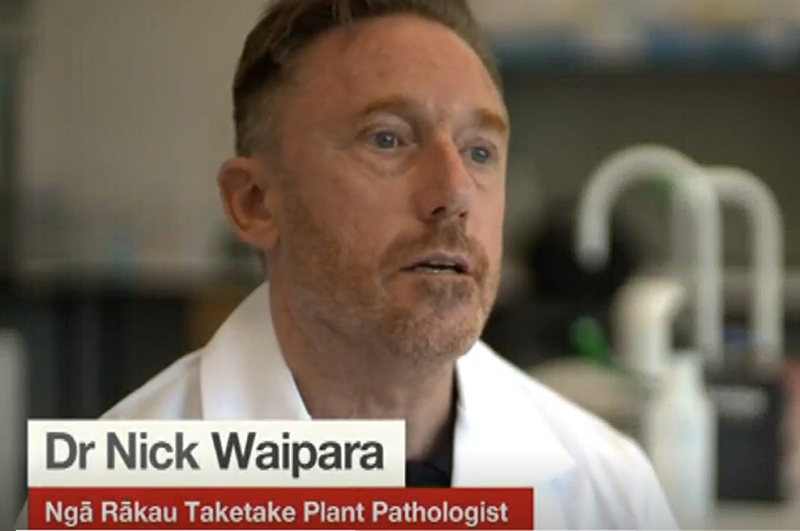 January 2023: The future's looking brighter for a new generation of kauri trees. Working with scientists, rongoā Māori practitioners say they're close to finding a cure for kauri dieback disease.

"I'm optimistic that it's there, we are not there yet but we are getting there," says Nick.

But Nick cautions that more research is still needed to validate whether the soil-pathogen phytophthora agathidicida has been eradicated from the sick kauri trees treated with rongoā.

Amanda explained how the kahikatoa spray used on the soil to treat the sick kauri, uses a mix of mānuka and kānuka and scientists have found that flavonoids from kānuka do inhibit phytophthora - the microorganism which causes kauri dieback. 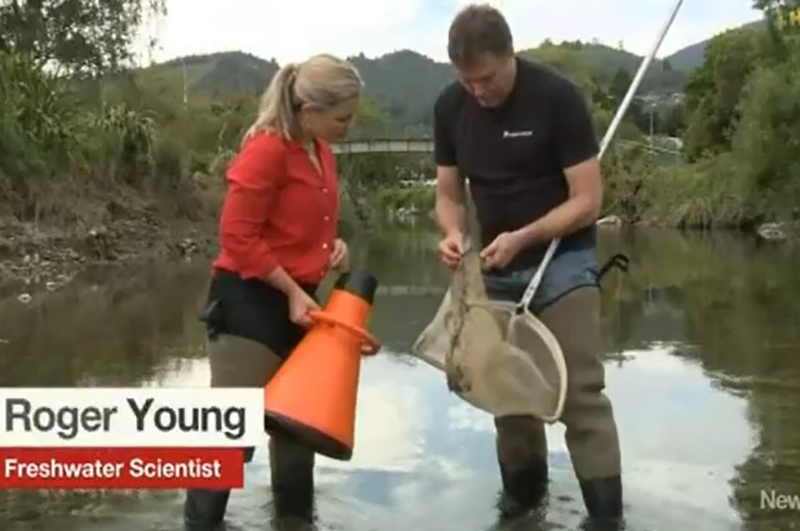 January 2023: In August 2022, devastating floods hit the top of the South Island, destroying aquatic life in its rivers and estuaries.

Journalist Alexa Cook from TV3's Newshub interviewed scientists from the Cawthron Institute about the ongoing impact from the event, which is believed to have killed 80 percent of the fish in Nelson's Maitai River. The scientists say it will take years for the area to recover.

Those critters were stripped from their home when the meandering Maitai turned into a raging torrent. It left an almighty mess and killed at least 80 percent of the eels, trout, whitebait and other fish living in it, Alexa reported.

"It was pretty devastating. There weren't many fish in the river for a while, and very little for them to eat," says Roger. 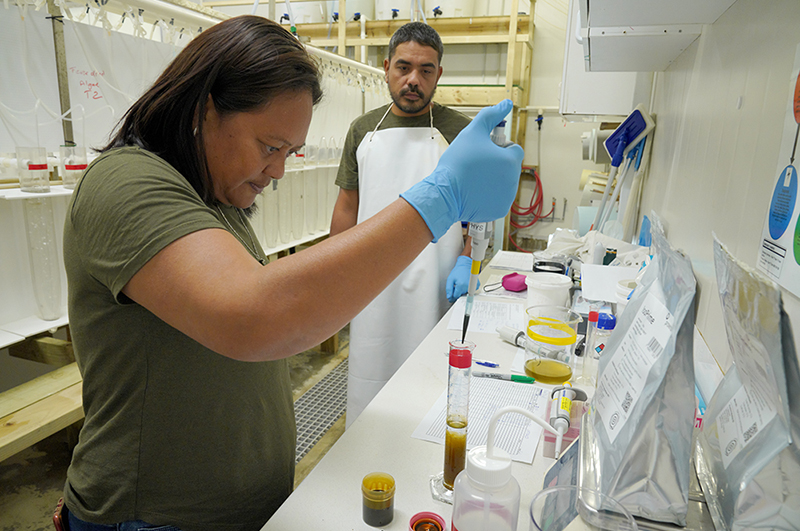 “The aim of our visit was to learn from Cawthron researchers’ shellfish hatchery expertise and take that knowledge back home to support our local shellfish industries." 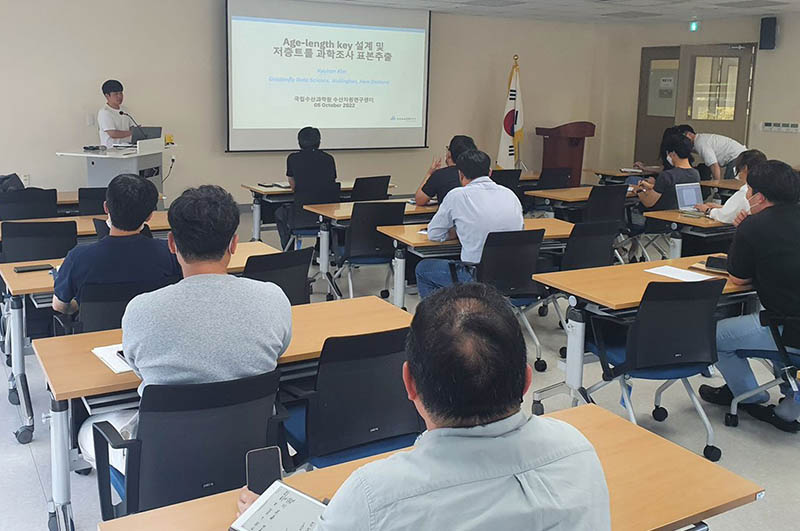 January 2023: Dr Kyuhan Kim visited his home town in September and October 2022 for the first time in nearly three years. Not only was it an opportunity to see his family again, but also to share his research in best-practice fisheries science.

Kyuhan presented part of his PhD research at the annual meeting of PICES. PICES is an intergovernmental science organisation that coordinates marine research in the North Pacific. Member countries include China, Japan, Russia, US, Canada and South Korea. This year the meeting was conveniently held in his hometown of Busan.

“I spoke about the stock assessment models I developed at university and in my work at Dragonfly. I suggested some possible improvements for the current methods. About 30 people were in my session, and there was quite a lot of interest in my work.”

Kyuhan also spent time sharing his knowledge with the staff and marine biology students at Pukyong National University, where he studied for his masters degree. 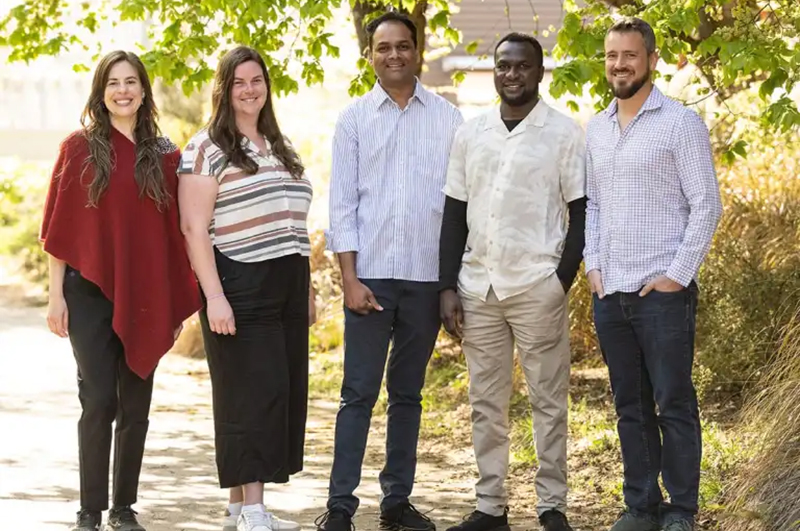 January 2023: Bragato Research Institute is gearing up to ‘evolutionise’ Sauvignon Blanc, thanks to six scientists and a newcomer called PromethION.

Dr Darrell Lizamore leads the Sauvignon Blanc Grapevine Improvement Programme (Sauvignon Blanc 2.0) out of a laboratory at Lincoln University. He says the programme isn’t traditional breeding, crossing or genetic modification, but a mission to sequence the DNA of New Zealand Sauvignon Blanc, looking for patterns of increased natural mutation that may help vineyards respond to future challenges. “Plants have an innate ability to change their own genetics when confronted with an environmental shock. If we can use this response to produce vines with different traits, then we could select those better suited to future viticulture.” 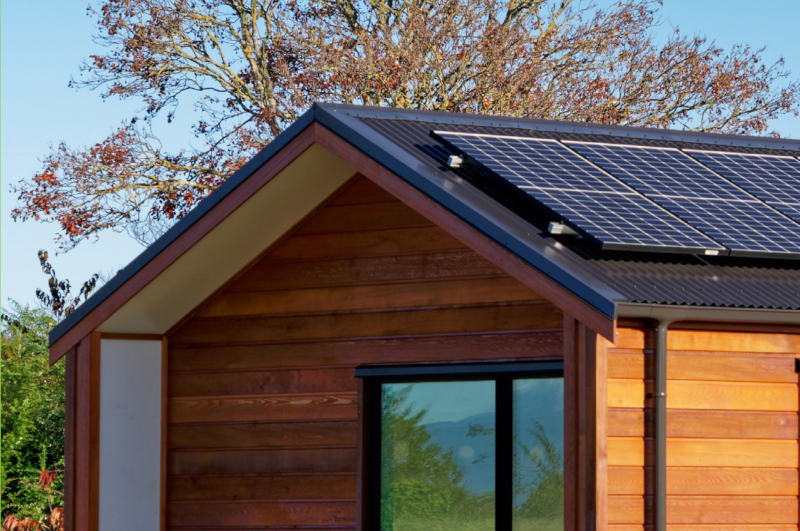 January 2023: A long-term study of the sustainability of new homes shows not a lot has changed in the past decade. While there has been significant growth in sustainability services, most homes are still built to basic Building Code requirements. It seems that sustainable housing won’t increase until the Code requires it says BRANZ Building Scientist James Sullivan.

Since 2012, BRANZ has been tracking the sustainability indicators of new detached housing constructed in Aotearoa New Zealand. A study is carried out every 4 years, most recently in 2020 and focusing on random samples of newly consented detached houses in Auckland, Hamilton and Christchurch.

James writes that of the 210 houses examined in 2012, none could generously be classified as high performance with multiple elements having significantly above Code R-values. In the 2016 and 2020 samples, there were a few (7 and 5) – all in Christchurch. 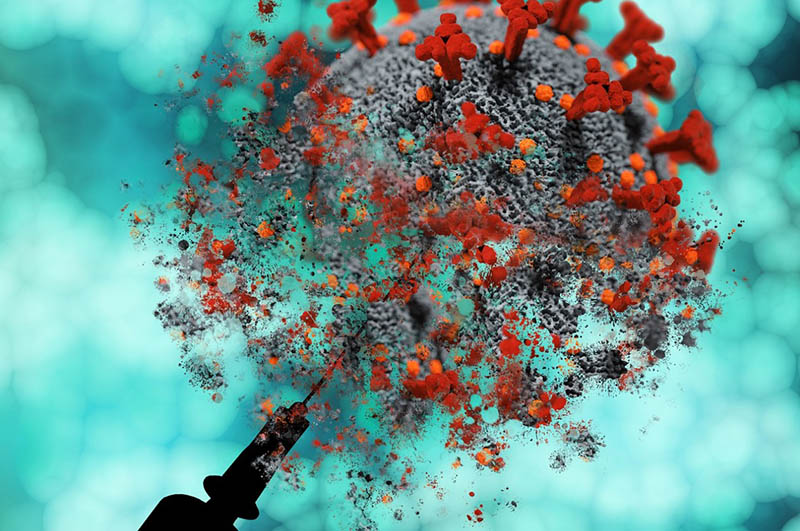 January 2023: The Ka Mātau, Ka Ora study is the largest evaluation of COVID-19 vaccine immune responses in New Zealanders, focusing on some of the populations at higher risk from COVID-19, such as Māori, Pasifika, the elderly and those with comorbidities.

The latest data shows a first booster dose significantly improves the ability of vaccine-induced immune responses to neutralise viral variants, including Omicron, across all demographic groups, following a period of waning immunity after a second dose.

“The results are a clear call to action to the nearly one million New Zealanders eligible but yet to get their first booster,” says Dr Maia Brewerton, Clinical Director of Vaccine Alliance Aotearoa New Zealand – Ohu Kaupare Huaketo (VAANZ) which led the study.

“Vaccination continues to be one of the best tools we have for protecting ourselves and our whānau from getting really sick from COVID-19. But two doses isn’t enough – at least one booster dose is key against Omicron, particularly for people vulnerable to more severe COVID-19 disease, including our Māori and Pasifika populations.” 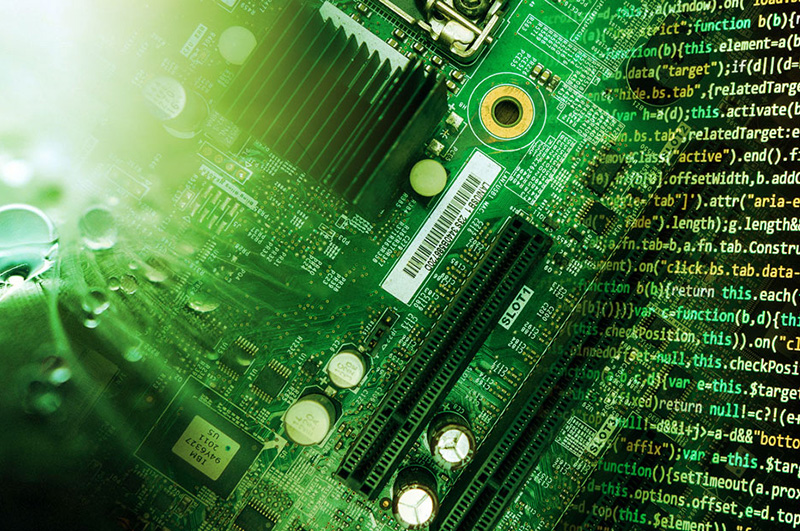 December 2022: Firstly, Season’s Greetings to all our readers in the science community and beyond. We hope that you all take some much-needed time off to spend with family and friends this festive season and recharge your wellbeing cup to make ready to tackle the challenges laid before us in the coming year.

The past couple of months has provided interesting times for our Independent Research Organisations (IROs): the Government’s Te Ara Paerangi - Future Pathways White Paper was released on 6 December; IRANZ has welcomed a couple of new member organisations; several members have been successful in the recent Marsden Funding round; and we say goodbye to one of our members – PlantTech, who unfortunately has had to shut its doors.

PlantTech Research was formed to apply cutting edge artificial intelligence and machine learning to the scientific challenges in New Zealand's horticulture industry, with the company attracting some of the best and brightest from around the world, and already they had been making headway in a number of research areas. Image: PlantTech.