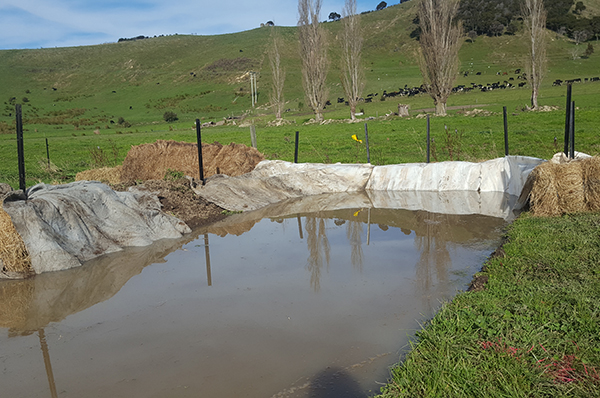 A sediment sump at the terminus of a trench to stop sediment running off into surface waterways. Photo: Aqualinc.

Aqualinc is assisting the Kaikōura Plains Recovery Project (KPRP) with drainage solutions on a number of farms around Kaikōura. The 2016 earthquake centred in Kaikōura caused extensive land damage, with land movements causing significant changes in local hydrological conditions. Many pastoral areas became waterlogged and unproductive as a result.

The team from Aqualinc, including Dr Helen Rutter, Ian McIndoe, Rose Edkins, Dan Farrow, and Justin Legg, have been assessing the likely sources of the water, determining water quality and flows, and developing drainage plans to remediate the land, with the aim of bringing it back into productive use again, while minimising impacts on existing local streams and rivers.

An initial assessment of one of the farm sites in February 2019 included:

Senior Geologist and Environmental Scientist Justin Legg says the proposed drainage strategy entailed the excavation of a 450 m open drain during Autumn 2019, with punched Nexus-pipe laterals to be installed in the later spring summer season.

“One of the key issues in this work was to avoid any contamination via sediment loss to the adjacent creek and waterways during the excavation process.

“To mitigate this risk, and minimise environmental impact, Aqualinc developed several low tech sedimentation control techniques that could easily be implemented by farmers. These included hay bale sediment traps and a sediment sump at the terminus of the trench,” says Justin. 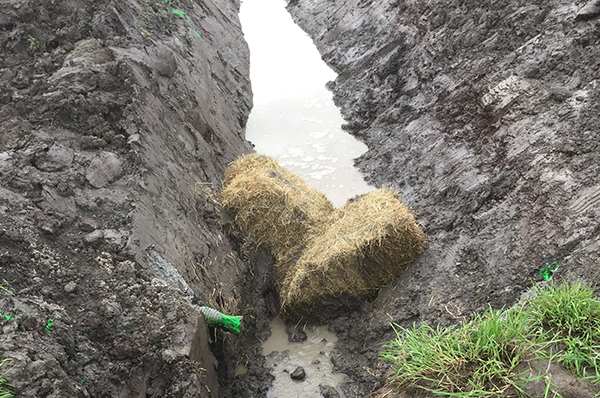 One of the hay bale sediment traps.

The intention of these features was to slow the incoming water to reduce scouring of the base of the trench and reduce additional sediment loading and allow suspended particles to settle.

The team report that this approach resulted in a 98.4% drop in turbidity (2300 to 36 NTU) of the trench discharge entering the stream. Turbidity is a key test of water quality. It is the degree to which water loses its transparency because of suspended particulates. The more suspended solids in the water, the murkier it gets and the higher the turbidity. 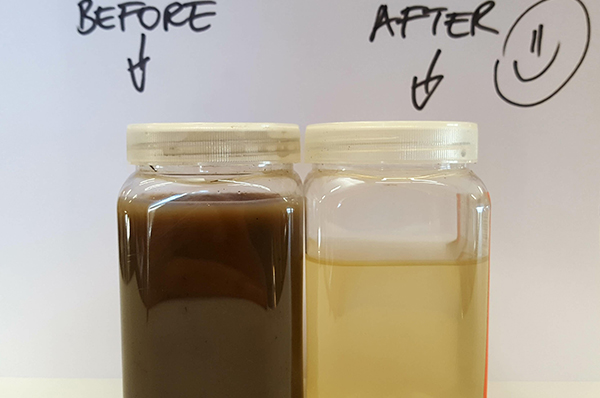 Sometimes with any solutions there are surprises - some days after the trench was excavated, ferruginous oxidised material was noted seeping from the trench walls. The team reported that the marine/estuarine-derived grey clays at this location were slightly caustic with a pH of 7.5 to 8.0. 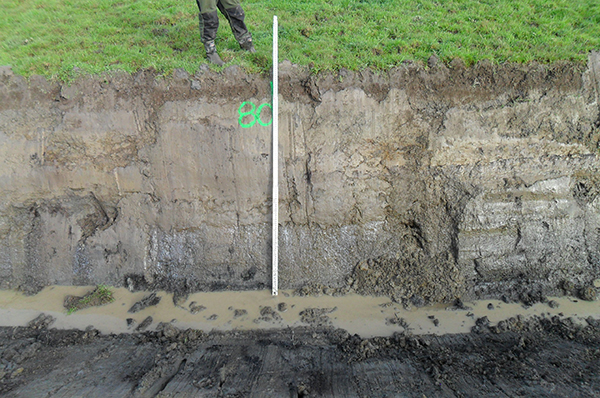 Trench at 80 m immediately after excavation. 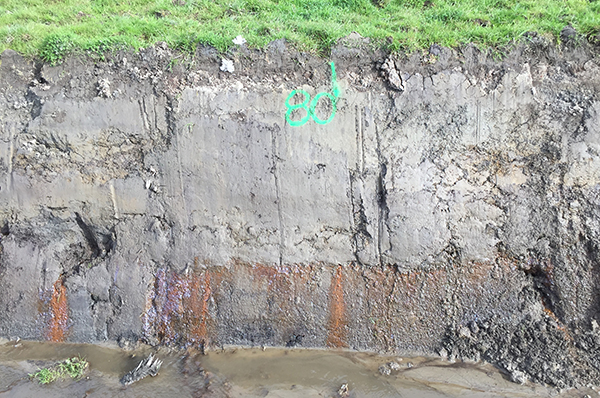 “It was deduced that in situ iron(II) hydroxide was undergoing oxidation to form insoluble ferric hydroxide (Fe(OH)3) – known locally as ‘ochre’.” Ferric hydroxide is insoluble and forms a staining material that attaches to suspended particles, forming a brown sludge that can have a number of undesirable impacts including:

Whilst this issue is still being investigated, in order to mitigate the potential impacts, the following solutions are being considered:

These proposals were passed on to the KPRP Project Manager and the Kaikōura Cultural Land Management Advisor so that appropriate solutions could be developed that incorporated Mātauranga Māori.

Justin says these drainage trials have highlighted potential issues that can arise whilst implementing drainage solutions to alleviate the impacts of earthquakes. “However, with some thought - solutions can be developed that are low tech, affordable, and utilise locally and easily available materials. By incorporating Mātauranga Māori into this development, there can be a significant reduction of potential impacts of restorative works such as this to local streams and surface waters.”

Aqualinc acknowledges and thanks the KPRP Project Manager, Jodie Hoggard, and the Kaikōura Cultural Land Management Advisor Makarini Rupene (Ngāi Tūāhuriri) for their support with this project.