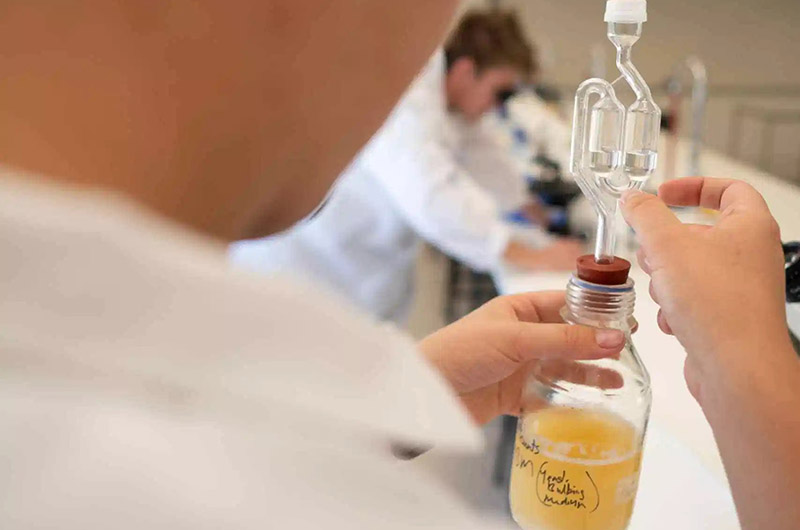 Among other initiatives, the Bragato Research Institute is offering a scholarship for a Māori student studying a tertiary qualification in a science-related field with relevance to the wine industry. Image: BRI.

This year’s IRANZ AGM in June saw presentations by both the Pūhoro Stem Academy and the Innovative Young Minds (IYM) programme. Several Independent Research Organisations are involved, or planning to get involved, in both programmes. In addition, new academic scholarships have been added to the independent research portfolio to encourage young people into science, technology, engineering, and mathematics (STEM) careers in New Zealand.

Pūhoro was launched in 2016 in response to the low engagement of Māori in STEM. Naomi Manu, Director of Pūhoro, says that to set about changing this they needed to look into secondary schools and develop a pipeline for young Māori to come through secondary school and into tertiary education and then transition into employment.

In its fifth year, there are just over 800 young Māori involved in the programme. They now have students in South Auckland, Manawatu, Bay of Plenty, Kapiti Region, and Christchurch. These students range from Year 11 through to second year tertiary. Naomi said that since 2016 the students have either meet or exceeded national pass rates of Māori in science and mathematics. She said it is also significant that around two thirds of the students were not originally on an academic pathway. “The largest drop-off of Māori in science and mathematics occurs between Year 11 and 12, when it is no longer compulsory in schools. So, if students are not on an academic pathway by Year 11, it is likely that they are not going to do sciences once it is no longer compulsory, particularly if they are not engaged in an academic programme.”

Naomi says they have been successful in capturing Māori in Year 11 to set them on an academic pathway through secondary school. She said they are providing mentoring, tutoring, and pastoral wraparound support which has seen them also successfully transition Māori STEM students into tertiary education at a much higher rate than the national average for Māori. She said Pūhoro is bringing through future Māori STEM workers who will also be bringing a Vision Mātauranga (VM) perspective to the industry.

Bragato Research Institute has recently announced a new scholarship with Pūhoro STEM academy for the 2020-2021 academic year. This scholarship is for a Māori student studying a tertiary qualification in a science-related field with relevance to the wine industry.

“The New Zealand wine industry is approaching $2 billion and the opportunities for tomorrow’s research continue to grow, from soil science and environmental management through to technologies needed for bottling and vineyard automation,” says MJ Loza, CEO of Bragato Research Institute.

The scholarship recipient will also participate in an internship with Bragato Research Institute this summer, as part of a wider programme administered by Pūhoro STEM academy.

HERA, the Heavy Engineering Research Association, currently have two female students from Pūhoro on Whanake undergraduate engineering scholarships. One recipient is at Massey University and the other at the University of Canterbury. Pūhoro have also been involved in providing te reo Māori lessons for HERA staff.

Also launched in 2016, the Innovative Young Minds (IYM) programme seeks to encourage young women to explore science, technology, engineering, mathematics, and high-tech manufacturing (STEMM) as potential careers. Focussing on Year 11-13 students they hope to inspire young women to consider careers they may not even know exist. IYM Project Manager Sue Avison said that when science organisations were approached, they were keen to diversify, but reported that there was a lack of females applying for available positions.

The IYM programme began when Rotary partnered with Hutt City Council; Rotary seeks to facilitate youth engagement and leadership programmes, while the HCC have a goal to expand the science and technology sector in Lower Hutt.

In 2017 and 2018, the programme ran for only Wellington region students. It proved so popular that last year the programme was extended to include 80 young women from throughout New Zealand in two intakes of 40 in two week-long residential courses hosted at the Silverstream Retreat in the July school holidays. The students were sponsored by Rotary Clubs from throughout New Zealand. A wide range of STEMM opportunities were showcased.

“We had some feedback that girls have often dropped out of science as they had absolutely no idea where science and technology subjects will lead them - some dropped out because they were the only girls in the class. So, our job was to show them there was enormous range and depth out there and to introduce them to women working in science that have had these really interesting career paths,” says Sue.

“We provided content for two of the workshops - Dr Alissa Cait from the Malaghan Institute and Drs Irene Braithwaite and Karen Oldfield from MRINZ gave a talk in a medically-focussed session. Dr Nancy Garrity from NZIMMR, Michelle Barry from the Bragato Research Institute, and Dr Troy Coyle from HERA were in another season, chaired by Sophie Rebbeck from Lincoln Agritech. So, we had very good exposure in those two sessions from IRANZ members. Dr Wendy Turvey from WSP Research also organised a session.”

Other education and early career initiatives by IROs

In addition to the Pūhoro scholarship, Bragato have also announced collaborations with Nelson Marlborough Institute of Technology (NMIT), Eastern Institute of Technology, Otago Polytechnic, and Marlborough Research Centre on research and student learning for the wine industry. This new Memorandum of Understanding (MOU) paves the way for research collaboration between some of the country’s leading wine and viticulture tutors, their students, and the top research scientists and technicians based at Bragato Research Institute. Read more.

Every year, the HERA Foundation makes a series of post graduate research scholarships available. Since 1997, they’ve helped over 20 students to further their education and complete their PhD or ME. If required, HERA also offers guidance on prospective themes for students who want to pursue research in heavy engineering industry related projects.

HERA also takes on a number of interns, and is interested in students with a structural focus. In the past, interns have included mechatronic engineering, IT, marine policy and resource management - depending on the work HERA is trying to deliver. Read more and apply online.

The Motu Research and Education Foundation provides funding for internships, scholarships, and seed funding to explore new areas of economic and policy research.

Each year Motu offers eight $1,000 scholarships (one for each NZ university) to a student of Māori descent who intends to study economics and is planning to enrol in a second year econometrics course, or equivalent quantitative economics course.

Motu also offers paid summer internships in their Wellington office. Interns work on research projects led by one of the Senior Fellows, and are encouraged to think critically about the public policy and research issues involved. Internships build students’ skills, as well as providing researchers with useful research assistance. More than 50 young researchers have ‘graduated’ from this programme since 2000.

Motu offers salaried research analyst positions to smart and motivated Honours and Masters graduates. While other grad positions involve fulfilling tasks for their seniors, Motu research analysts are encouraged to develop their own analytical skills, and author papers alongside senior fellows. Motu has employed dozens of research analysts who have moved on to other roles. They usually have a strong cohort of between four and six bright young people working on a wide variety of topics.

Read more about opportunities at Motu.

PlantTech plans to host two students over the summer, as well as offer some summer internships to PhD students or post docs. They are also engaging with Pūhoro with the aim of improving Māori representation in their research programmes.

“We are also looking at the best ways to bring matauranga Māori leadership into our operational and strategic activities. This is an area that Pūhoro and their staff have particular insights in,” says PlantTech CEO Mark Begbie.

BRANZ also facilitates an annual student competition with a $7500 prize for the winning team. The ArchEngBuild Challenge is an intensive three-day competition for New Zealand tertiary students studying architecture, engineering, or construction management. Ten teams of three students respond to a real-life client brief involving enhancing the environment of a town or city while also demonstrating effective inter-disciplinary collaboration. Challenge participants are selected from student self-nominations or nominations by representatives from tertiary education organisations. Read more.

There are study positions for postgraduate Masters and PhD medical research students at the Malaghan Institute. Students from Malaghan are sought after internationally, and have gone on to work at leading research institutes including the Trudeau Institute and National Institutes of Health in the United States, the Ecole Polytechnique Fédérale de Lausanne in Switzerland, and the Peter MacCallum Cancer Centre in Australia. Malaghan has a long-standing affiliation with New Zealand universities and is considered one of the leading organisations for a PhD in Immunology. While studying at Malaghan, students receive extensive mentoring and are supported to attend international conferences and visit collaborators laboratories overseas to keep abreast of the latest developments in their research field. Read more.

The Medical Research Institute of New Zealand (MRINZ) has several programmes that provide the basis of higher education degrees such as PhDs, Masters, and Diplomas through close ties with organisations such as Victoria University of Wellington, Otago University, Montepellier University France, and the University of Groningen Netherlands. They are also authorised by NZQA to award their own Medical Doctorate (MD) – a higher degree based on original research in a field of medicine. The aim of this course is to allow medical graduates to produce a substantial body of published original research in a field of medicine. MRINZ also hosts a number of PhD students within their clinical trials programme. Read more.